This past April, AWCI hosted their annual AWCI Convention and INTEX Expo in Long Beach.

On April 29, they hosted the annual Awards Brunch, during which AMICO was recognized as a manufacturer and supplier for the historic renovation of the St. Mary Cathedral Basilica in Galveston, Texas. The project was nominated for AWCI’s Excellence in Construction Quality Award, and won the top honor in the category of Historic Renovation, acknowledging all AWCI members, contractors, manufacturers, and suppliers who took part in the project. AMICO would like to thank AWCI for this prestigious honor! 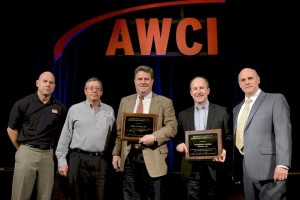 St. Mary’s Basilica is one of the oldest churches west of the Mississippi, and serves 1.5 million Catholics in the area. In spite of surviving one of the the notorious Great Storm of 1900, deemed the worst natural disaster in US History, the Basilica was filled with 6 feet of water and left horrible damaged, vacant and rotting, after Hurricane Ike hit in September of 2008. In the fall of 2013, a full restoration began to bring back the former glory of the facility, as well as ensure stronger infrastructure to withstand potential future natural disasters and flooding.

Check out the video below for more information, as well as a glimpse into the restoration process and final look upon restoration completion.

AWCI is an organization is composed of over 2,000 companies and other organizations in the acoustics, ceiling, drywall, exterior insulation and finishing, and flooring systems, as well as fireproofing, insulation, and stucco contractors, suppliers and manufacturers of such, and those in allied trades.