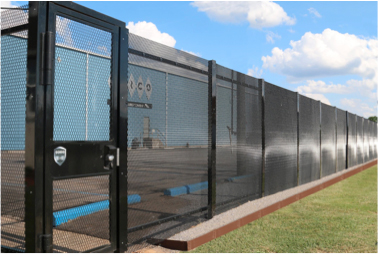 Birmingham, AL (September 7, 2016) — AMICO Security, producer of high security perimeter systems for over 20 years, launches Amiguard—one of the most innovative new products on the market today.

The Amiguard System was designed specifically for medium and high security applications to protect infrastructure and important assets including: border security, energy and the power grid, corrections, transportation, and government installations. The Amiguard framework was specifically designed to incorporate the latest in radar and surveillance technology combined with impact and crash resistance.

Continuous longitudinal rails tie the entire system together creating a full–length curtain wall—while also eliminating many of the cuts, clamps and connections that are necessary when installing most traditional fence offerings.

The patent–pending Amiguard System was designed to accommodate many different types of panels made of virtually any type of material. This allows customers to customize the system to defend against a wide array of threats.

This system has proven to be superior in strength and wind load capability, while at the same time greatly reducing overall installation time. Amiguard’s innovative design allows for the simple integration of fiber optic and impact cables, in addition to cameras, lights, radar and other accessories.

AMICO engineers have conducted Finite Element Analysis to verify its strength under significant wind loads up to a category 5 hurricane. These computer models were then tested and proven in actual conditions at Georgia Tech’s aerospace wind tunnel.

AMICO Security will be launching our newest innovation, the new patent-pending Amiguard Perimeter System, at ASIS 2016! Be sure to visit us at booth 1242 to check out the latest from AMICO Security.