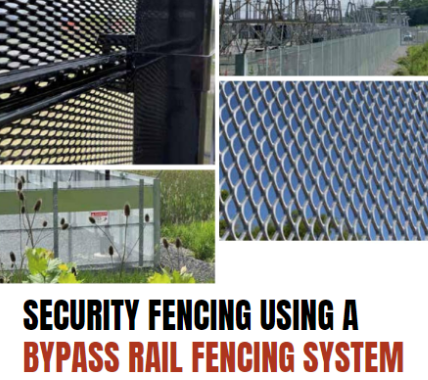 Expanded Metal infills are often used in high security fencing applications such as electrical substations and are described in an ASTM standard for High Security fencing (ASTM F2548-20). Anti-climb and anti-cut properties of fence infills can be adjusted according to specific security needs, from thick gauge expanded metal infills with small diamond hole patterns to lighter gauge welded wire panels and pales for palisade fencing.

All infills are considered to offer superior security compared to chain-link fencing, which is often replaced by new bypass rail security fencing systems.

Whenever a bypass rail fencing system is considered, the number of rails and the type of rail attachment is important. Since rail systems of a bypass fence system are located in front of the posts and behind the fence panels, they provide a complete independency between panel sizes and post spacing.

Therefore, the fence panels do not need to fit exactly in between posts which eliminates the labor-intensive process of field cutting fence panels to make them fit inconsistent posts. While comparable security fencing systems often specify tolerances of less than an 1/8” during post setting, bypass systems offer a much greater flexibility; in fact, spacing could be adjusted by one foot or more in instances where underground utility lines interfere with the desired post location.

Considering that AMICO is one of the largest expanded metal manufacturers in North America, AMICO Security offers the greatest selection of expanded mesh panels in the fencing industry. Panels can be varied to fit any security or architectural need. Chameleon is compatible with the AMIGUARD® 5000 series welded wire meshes and works well as a framework for a palisade fence. Chameleon is designed with the intent of minimizing labor required for installation; the rail system does not require any fasteners to connect rails to each other along the fence line by using a fastener-less friction fit splice system.

Additionally, the brackets attach to the rail with a simple through-hole, allowing the rail to pass through securely without any additional fasteners.